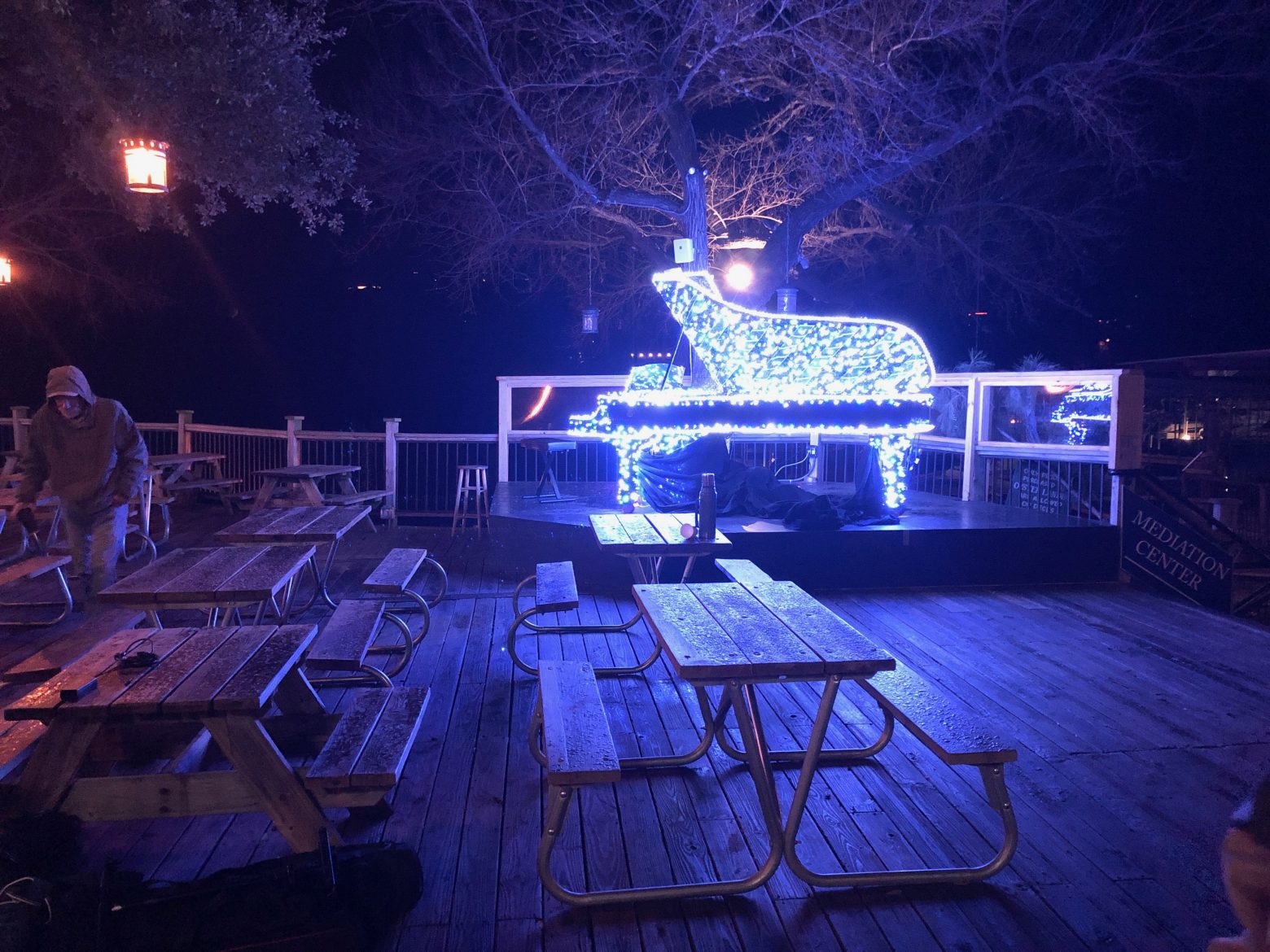 This morning we took a lean 3 person filming crew out to Mozart’s Coffee Roasters to begin shooting a music video for our Continuing Artist Esteban Alvarez. This incredibly talented Steinway Artist performs regularly worldwide, is a visionary, and astoundingly, he is active both as a businessman and musician. Of course, those were the furthest things from our minds at 5AM on the coldest morning of the year, a day we woke up to find a pure white blanket of snow covering Austin.

Esteban is the very first artist to take advantage of the Tonehaus Continuing Artist deal, starting back in September when the program was forged. He’s getting the finest in multitrack recording with the very advanced Swiss recording system from Merging Technologies coupled with our high resolution microphones. He’s also gotten video from two of his recording sessions, sprinkled with photography. Today we’re shooting a dream sequence for his music video, using the lighted piano at Mozart’s as the centerpiece, coincidentally a Steinway. The song? A cover of the Bebu Silvetti hit song “Piano.”

We are very grateful to the owner and staff of Mozart’s who went out of their way to make this shoot successful. I have been on shoots in venues across the United States, and can tell you, it is rare and a big surprise to me. I am super-impressed by the effort they made to accommodate. Bravo Mozart’s Coffee Roasters! Stop by and say hi, you can find them online at https://www.mozartscoffee.com. 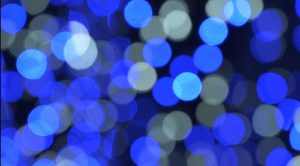 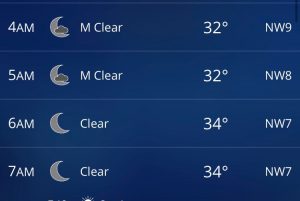 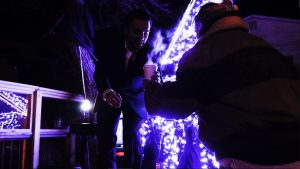 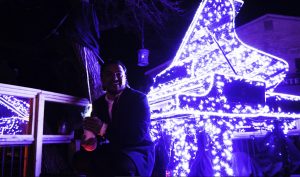 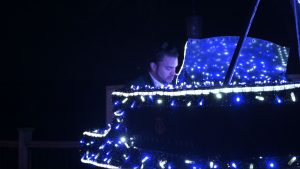 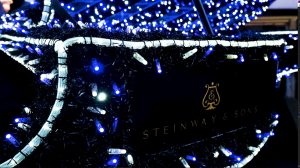 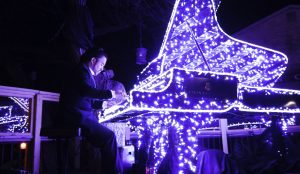 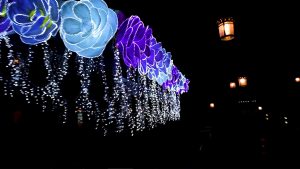 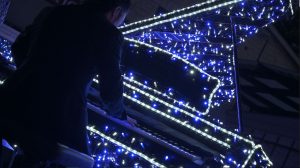 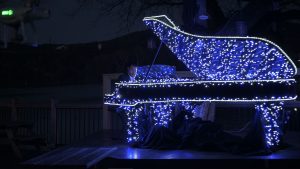 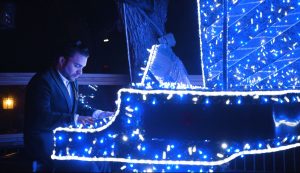 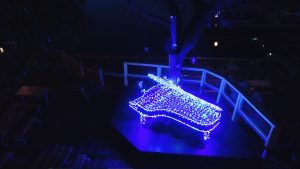 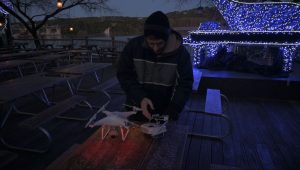 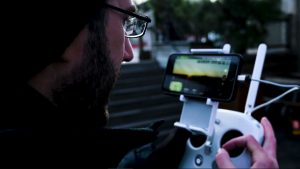 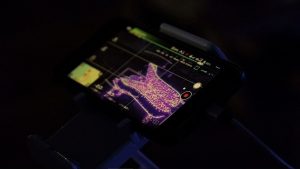 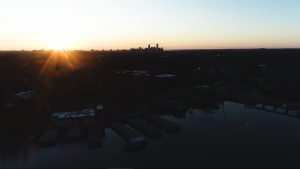 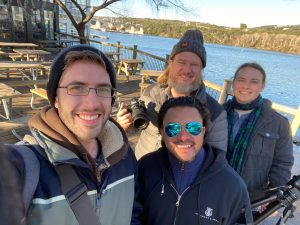 The Director of Photography on this shoot is David Lackey, a newer addition to the Tonehaus team. David and I have worked side by side in the high pressure situation of creating live content for South By Southwest Official Content doing live-streams. Last Fall he was the on-stage conductor camera operator for the broadcast HD three camera live-stream we produced for Chorus Austin’s Book of Rounds. As we were discussing this shoot I learned something new about David, and that is that he has produced a number of music videos, so all of his skills were brought on board this week.

In today’s shoot we used four cameras. David brought two Canons, his tool of choice, and I shot B-Roll and other angles with our Nikon Z6 full frame camera. The artist’s vision for this scene included a drone shot, and we delivered. It turns out that David is a licensed drone operator, his drone being the fourth camera. We captured a few angles looking diagonally down, a direct spinning overhead shot, and the sunrise and Austin skyline.

Our third crew member is intern Simon Reid. He’s completing a Communications degree at Texas State, and is also an accomplished cellist. He is an excellent fit for Tonehaus and we have been enjoying his presence since December. He has been on a lot of location recordings already, and will be learning the Pyramix and Adobe software we use in the studio, as well as editing, mixing and mastering workflows. We’ll catch him up to date with some boring and time consuming office tasks, and some more interesting things like video editing, color correction, graphics and video compression techniques. And, we’ll also teach him soldering and do an upgrade of our THOR24 cables. He’s a natural who picks things up effortlessly, shows up early, and we’re looking forward to sharing things we’ve learned over the years and passing them on.

And of course, our talent, Esteban Alvarez, is an inspiration; an extremely talented artist and just plain human extraordinaire — when not globetrotting through Europe, the Middle East, or South and Central America, or running multiple companies, we’ve been able to actually do some production work here in Austin. Looking forward to this amazing album that should be coming out by the end of the year!

We are looking forward to another shoot to complete all the capture for this video shortly. Stay tuned!