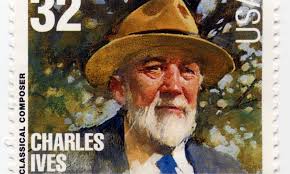 Ives is surely the quintessential American composer. His music bursts at every seam with the idiom of our culture. Like America itself, Ives brimmed with all our contradictions and complexity, an amalgam of traditional roots and far-reaching vision. He was born and raised in Connecticut. The New England Transcendentalists’ belief in nature and self-reliance imbued him with a basic faith both in the common man and in himself. Ives was a man of deep philosophical conviction, always insisting on doing things his own way or not at all. His solution was a hard but practical one – he relegated art to the sidelines and devoted himself to the world of business. He consigned his musical career, such as it was, to evenings and weekends, during which he compiled a striking portfolio of far-fetched compositions whose atonality, wildly complex rhythms, linear structures and other devices anticipated by decades much of what we have come to consider the leading edge of 20th century music. Excerpt from “Three Places in New England”